DIA joins forces with Cáritas, the Red Cross and World Vision to develop its Strategic Sustainability Plan in Spain 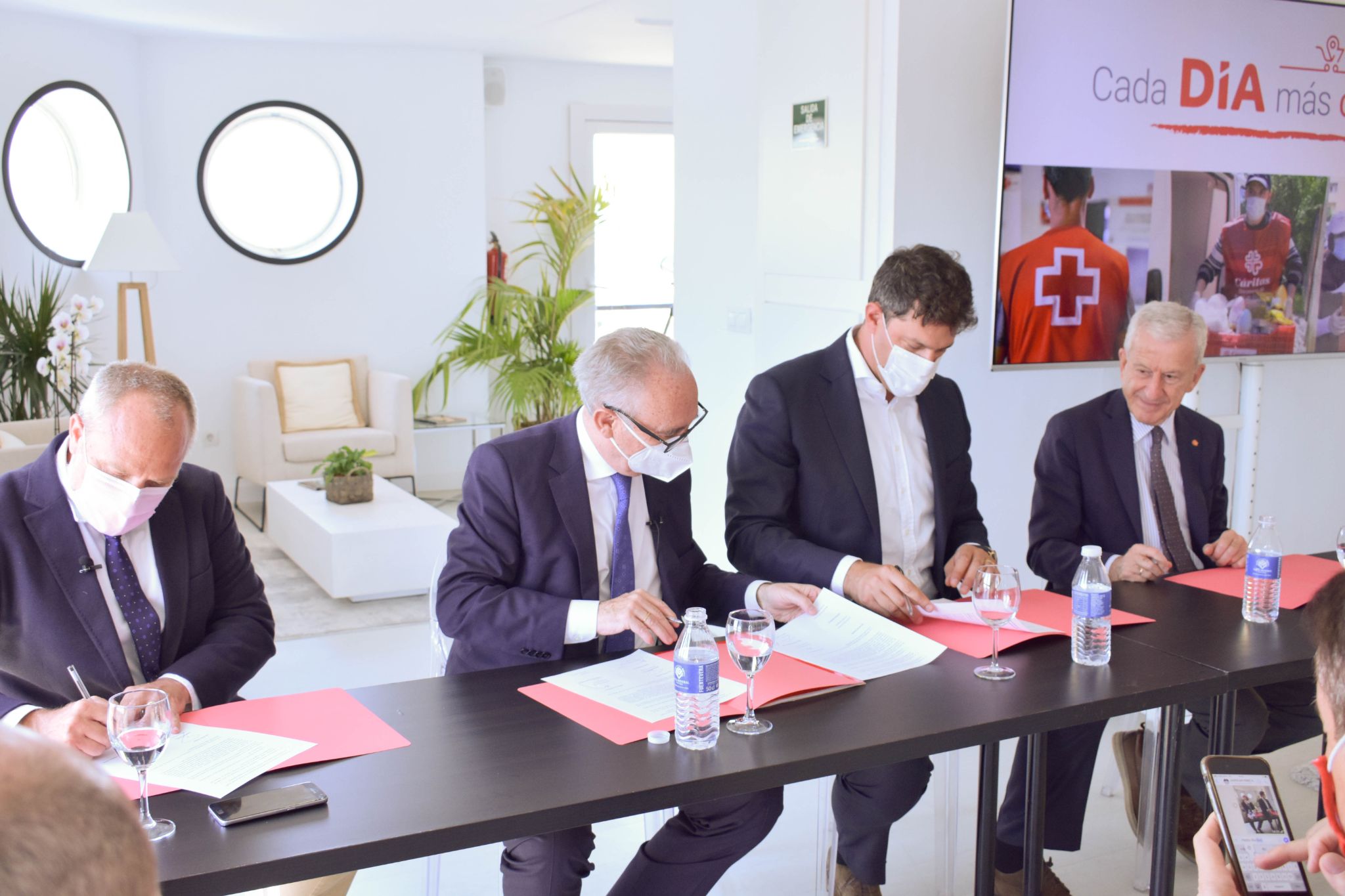 The organisations have signed a partnership agreement to help improve the quality of life of the most vulnerable groups in society.

DIA’s Strategic Sustainability Plan 2021-2023 is based on three core issues: reducing the food gap, reducing the geographical gap and bringing vulnerable groups into the labour market.

This alliance is in line with the company’s aim to bring DIA closer to society every day.

Las Rozas de Madrid (Madrid), 19 July 2021. DIA Spain has signed an agreement with Cáritas, the Red Cross and World Vision to work together over the next three years on a number of initiatives to improve the quality of life of society’s most disadvantaged groups. This alliance is part of DIA’s Strategic Sustainability Plan, which is based on three key lines of work: reducing the socio-economic food gap, reducing the geographical food gap and bringing vulnerable groups into the labour market.

During the signing ceremony, Ricardo Álvarez, CEO of DIA Spain, together with Manuel Bretón, Chair of Cáritas, Leopoldo Pérez, Secretary General of the Red Cross in Spain and Javier Ruiz, CEO of World Vision, highlighted that the company is changing fast and is undergoing a complete transformation process. “DIA’s transformation obviously affects the business side, but also the need to ensure the creation of sustainable value over time. It is here, at the heart of our transformation process, that the Strategic Sustainability Plan has been conceived, of which Cáritas, the Red Cross and World Vision are key partners. At DIA, we want to be even closer to society and the world around us. Step by step, neighbourhood by neighbourhood. And we want to do so based on what makes us unique: proximity, which gives us the possibility to have an impact on some of the most important challenges facing Spanish society”, he explained.

DIA’s first Strategic Sustainability Plan includes 15 areas related to the United Nations Sustainable Development Goals (SDGs) which, over the next three years, will guide the company’s work on social, environmental and ethical issues and good corporate governance. This plan will focus on three lines of work that are key to DIA’s business model: reducing the socio-economic food gap, reducing the geographical food gap and bringing vulnerable groups into the labour market.

Alliance with Cáritas, the Red Cross and World Vision

With the new Strategic Sustainability Plan, DIA is embarking on a new path to develop its role as an active agent in contributing to social issues, a challenge that DIA shares with Cáritas, the Red Cross and World Vision. These three charities will help DIA to successfully develop its Strategic Plan.

During the signing ceremony, Manuel Bretón, Chair of Cáritas, recalled that his organisation values the solidarity of society, people and companies such as DIA. “Initiatives like this help us to be closer to the most vulnerable people and reinforce the promotion of the right to food and decent employment”, he added.

Leopoldo Pérez, Secretary General of the Spanish Red Cross, thanked DIA for “the initiative to promote a partnership agreement with charities within the framework of its Strategic Sustainability Plan, which will enable us to reinforce the support we give to vulnerable people. The agreement strengthens the partnership that both organisations have had since 2009, and will provide assistance in terms of employability, healthy eating and the purchase of products on advantageous terms“.

Lastly, World Vision’s CEO, Javier Ruiz, also thanked DIA for this partnership, which will allow them to reach the most vulnerable children and their families via nutrition projects throughout Spain. “Building alliances, such as the one we are signing today, is key to bringing an end to poverty and hunger, guaranteeing the rights of all children and achieving a fair and sustainable world. It is a great honour to be part of DIA’s Sustainability Plan, a further step in our 70-year mission in 100 countries around the world where nutrition and food assistance programmes are a key focus. Last year, 10 million people in 31 countries received food aid from World Vision,” he said.

This agreement between DIA, Cáritas, the Spanish Red Cross and World Vision has already been a success. Thanks to Cáritas and the Red Cross, in the last two years the company has brought in over 200 people from vulnerable groups at risk of social exclusion to its workforce, thereby fostering their inclusion in the labour market.

In addition, as a result of its alliance with World Vision, DIA donated more than 1,200 kilos of basic food items to families going through difficult times during the first half of the year, reaching 175 adults and 25 children.

DIA and the Spanish Red Cross have also fought against the socio-economic food gap through the “Tu compra Ayuda” (Your Shopping Helps) programme, giving visibility to this campaign in over 2,800 DIA stores throughout Spain in order to raise awareness of child poverty, which affects one in three children in Spain, and distributing 10,000 meals to these vulnerable children.

Cáritas Española is the official confederation of charitable and social action organisations of the Catholic Church. Established in 1947 by the Spanish Episcopal Conference, its aim is to carry out the charitable and social action of the Church in Spain, through its confederate members. It promotes the development of individuals and peoples, especially the poorest and most excluded. Further info: www.caritas.es

About the Spanish Red Cross

The Red Cross is the world’s largest independent humanitarian and citizens’ movement. For 157 years it has been working with public and private entities to ensure that humanity and dignity reach all people everywhere, at all times and in all circumstances.

In Spain, the Red Cross has more than 250,000 volunteers and more than 1,400 access points throughout the country, which allow it to help over 4 million people a year, of which more than 1.7 million are helped through social programmes. All this with the support of nearly 1.4 million members, companies and allies in all sectors of society.

In addition to its usual activity with vulnerable people, when the pandemic was declared, the Red Cross launched the RESPONDE Plan against Covid-19, a comprehensive plan of action across all areas: relief and emergencies, health, social inclusion, education, employment and environment, which has already reached over 4 million people through more than 21 million actions in what is the largest mobilization of resources, skills and people in its history.

World Vision is a Christian development, humanitarian aid and advocacy NGO. Since 1950 it has been working to fight poverty and achieve sustainable development among the world’s most vulnerable communities, families and children. Every 60 seconds a family gets water, a hungry child is fed and a family is given the tools to overcome poverty.

World Vision is the largest NGO water provider in the world reaching one new person every 10 seconds and 3 schools every day. With a global presence in nearly 100 countries, it has the capacity to respond quickly to emergencies, crises and natural disasters: in 2020, more than 27 million people were helped during 66 emergencies in 48 countries. ​

Transparency generates trust, which is why the accounts are audited annually by Fundación Lealtad, PKF Auditores and filed with the Protectorate of Foundations. For further information visit: http://www.worldvision.es/ 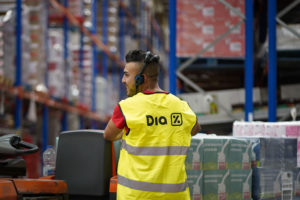